Archaeological finds unearthed at the site of the Sung Wong Toi station has revealed a historical time preserved in the strata of our soil. Among the relics are ceramics dating back to the Song Dynasty, a golden age of Chinese culture.

“Earth Song” pays homage to this period - a pinnacle of cultural refinement. Motifs and compositions from Song Dynasty paintings are given a contemporary treatment in two pairs of ceramic reliefs. Set against backgrounds of changing seasons and times of day, fluttering butterflies and rhythmic tides convey a poetic sensibility, and forge an imaginative link between historical literati and present-day commuters.

The extensive research, preparation and creative process behind the final art pieces are documented in a photographic collage along the corridors. All photographs, like the reliefs, are framed in circles, reminiscent of foot rings of ceramic vessels excavated at the site. These unassuming fragments illustrate natural exquisiteness and manifest the everyday aesthetics of a culture worthy of celebration.

Fiona Wong graduated from the University of East Anglia and later obtained her MFA degree at the Chinese University of Hong Kong. She received a Starr Foundation award from the Asian Cultural Council in 2000 and was elected member of the International Academy of Ceramics in Geneva in 2007. She was appointed Expert Advisor for Hong Kong Museums in 2014. In 2017, she received the Outstanding Contribution to the Development of Arts and Culture Award by the Home Affairs Bureau, and was named Hong Kong Arts Development Award Artist of the Year. She is currently a Senior Lecturer at the Hong Kong Art School. 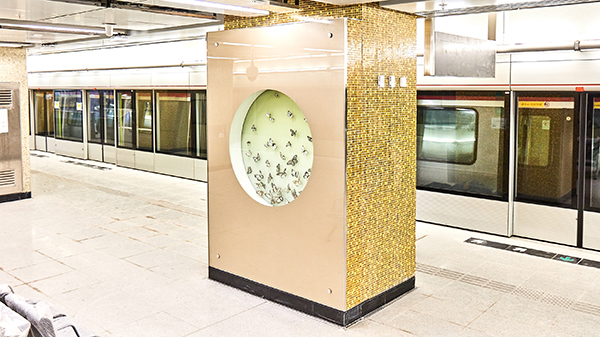